We can format the hard drive to clear the data when it’s been used for a long time. In addition, the new hard drive should be formatted before it’s put into use. In this essay, we will talk about how to format a hard drive.

Part 1: Why Hard Drive Should be Formatted?

Part 3: How to Format Hard Drive on Windows?

Part 4: How to Format Hard Drive on Mac?

Part 5: How to Format Hard Drive on CentOS?

Part 6: How to Format Hard Drive on Ubuntu?

Part 1: Why Hard Drive Should be Formatted?

Before formatting a hard drive, you shall confirm that the important files have been transfer to the safe position. Click here to learn about how to back up data.

There are many file systems. Next, we will explain some common file systems for you.
Hot Topic - ADsRenee Undeleter – Simple & Powerful Software for Data Recovery

Easy to use Recover data by 3 steps;

Image creation Create a partition image to read and back up data;

Easy to use Recover data by 3 steps;

FAT32: FAT32 is an old but still popular Windows file system. Now, it is mainly used in mobile storage devices with low capacity. If the hard drive is over 1TB, it should be in the NTFS file system. Besides, some digital cameras, game consoles and set-top boxed merely FAT32, but not NTFS.

NTFS: NTFS is the best Windows file system, given to performance and data security. But it is not compatible with all operating systems. Mac OSX and Linux can read the NTFS partitions, but they cannot modify the inside data. Besides, it is not available in the flash drives.

exFat: exFAT is the file system used for flash drives in Windows. It is the supplement for FAT32 which doesn’t support flash drives. It supports a file up to 16EB and a volume up to 24ZB.

HFS +: HFS + is the advanced version of HFS on Mac OS. Ahead of the release of APFS, HFS+ is the default file system on Mac OS. It is suitable for the mechanical hard disk and the hard drive holding the old Mac OS.

APFS: APFS is the specific file system for Mac OS High Sierra (10.13) and the later versions. This file system emphasize on flash drives and SSD. Of course, it can be used for hybrid hard drives and mechanical hard drives.

Ext2/Ext3/Ext4: On Linux, Ext2/Ext3/Ext4 is the commonly used file systems. Ext2 doesn’t have journaling feature. Therefore, the data will be lost as the system gets crashed. Then, as this feature is added into Ext3, the file system can be quickly recovered even the system is suddenly off power. Ext4 is the latest file system with outstanding performance improvement. It is the default file system on Linux now.

If you want to move the hard drive from Mac or Linux to Windows, you should format the drive to the NTFS file system. Next, we will talk about how to format a hard drive.
Part 3: How to Format Hard Drive on Windows?
It is not difficult to format a hard drive and add a new hard drive on Windows. All these operations can be completed in Disk Management. The processing time mainly depends on the capacity of the drive and the computer performance.
1. How to format a hard drive
Steps:
① Press the keys [Win + X] and then select [Computer Management].
② At the left pane, select [Disk Management] and the letter of the hard drive. Next, right click at the drive to select [Format].
③ Select the suitable file system. To use the hard drive on Windows, please select [NTFS].
NTFS is the default file system on Windows. Being supported by Windows NT, the file system is allowed to set disk quota and add file encryption management.
2. How to format a new hard drive
If it is first to use the new hard drive, you shall partition the drive. This is the necessary step to put the hard drive into use.
Steps:
① Open [Computer Management] – [Disk Management]. Right click at the hard drive and select [Initialize].
② Select the partition style, MBR or GPT. If your hard drive is over 2TB, please select GPT. If it is below 2TB, please select MBR.
③ After that, right click at the drive and select [New Simple Volume]. Click on [Next] to continue.
④ Set the size of the volume and click on [Next] to go on.
⑤ Select a letter for the drive.
⑥ Select NTFS as the file system. Select [Default] in [Allocation unit size] and name for the drive in [Volume label]. Then, check the box [Perform a quick format]. Finally, click on [Next] – [Finish].
Part 4: How to Format Hard Drive on Mac?
Mac users can format a hard drive in Disk Utility. Similarly, all data will be emptied. It is noted that you back up the important data before the process. Formatting a boot disk is different from doing for the other disks. Next, we will show the ways to format these two kinds of hard drives.
1. Format a boot disk
Steps:
① First, get into macOS Recovery Mode. Please restart the computer. Then, press the Command key while holding the R key. Release them until you see the Apple logo. Next, type the passcode of the administrator account to get into the mode.
② In the windows of masOS Utilities, select [Disk Utility] – [Continue]. 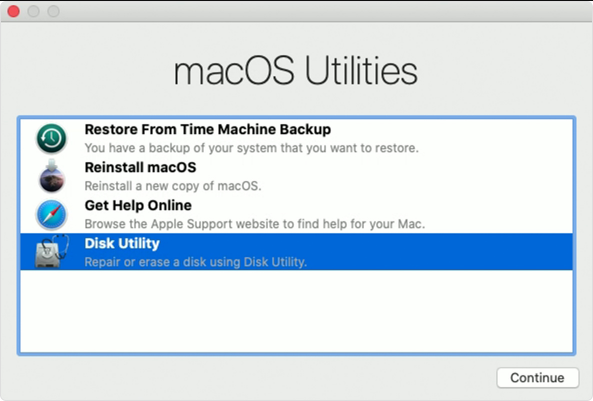 ③ In the following window, select [Show All Devices]. Then, at the left side, select the boot drive [Macintosh HD].
④ Find the volume named as [Data], such as [Macintosh HD – Data]. Click on the disk and then [-] at the top menu. Then, click on [Delete] when the notification pops up. You can follow these steps to delete the other volumes, except the Macintosh HD volume.
⑤ After deleting all the volumes, select the boot disk and then click on [Erase] at the top menu. In the following notification, select the format and the scheme, then click on [Erase] to format the drive.
⑥ Finally, click on [Disk Utility] – [Quit Disk Utility].
If you want to start up the computer from the drive, you can select [Reinstall macOS] in the window [macOS Utility] and follow the steps to reinstall the system.
2. Format the other disks
If you want to format the other disks, you can go to [Applications] – [Utilities] – [Disk Utility], and then erase the desired disk.
Part 5: How to Format Hard Drive on CentOS?
CentOS is a Linux distribution that provides a free, community-supported computing platform functionally compatible with its upstream source, Red Hat Enterprise Linux (RHEL). The administrator is allowed to format the hard drive on CentOS.
Steps:
① First, click on [Terminal] at the desktop.
② Type [sudo cfdisk] and then enter the passcode of the administrator account.
③ Select the partition, and then click on [Delete] – [Left Space].
④ Click on [New] to create the partition.
⑤ Click on [Main Partition] – [Write].
⑥ Type the command [sudo ffdisk –l] and enter the passcode to check the hard drive.
⑦ Then, you will see [dev/sda]. Type [sudo mkffs –t ext4 /dev/sda] and then [y] to format the hard drive.
Part 6: How to Format Hard Drive on Ubuntu?
Ubuntu is the operating system on Linux for the enterprise server and family.
You can format the hard drive by using the Disks utility that comes installed with Ubuntu. If the Disks utility gets wrong, or a partition is corrupted, you can use GParted to format instead.
Steps:
① First, open Dash and type [disk] to find Disks program.
② Select the drive you want to format at the left side. Then, click the gear button to select [Format Partition].
③ If you want to safely erase the data, please select [Overwrite existing data with zeroes] in [Erase]. Then, select the file system type.
● If you want to use the drive to transfer files between Linux, Mac, and Windows computers, please select [FAT].
● If you’re merely a Linux user, please select [Ext4].
● If you’re merely a Windows user, please select [NTFS].
Besides, name for the volume and click on [Format] to get the process started. Please wait for a certain long time.
Part 7: How to Recover Formatted Hard Drive?
How can we recover the data from the formatted hard drive when you forgot to back up? Try Renee Undeleter! The software offer multiple modes, such as fast partition scan, whole partition scan and whole disk scan, to greatly recover the data as long as it is not overwritten. Windows 7/8/10/Vista/XP/2000 and Mac OS X 10.6/10.7/10.8 are available. The clear interface is friendly to beginners.
Renee Undeleter - Simple & Powerful Software for Data Recovery

Easy to use Recover by 3 steps.

Easy to use Recover by 3 steps. 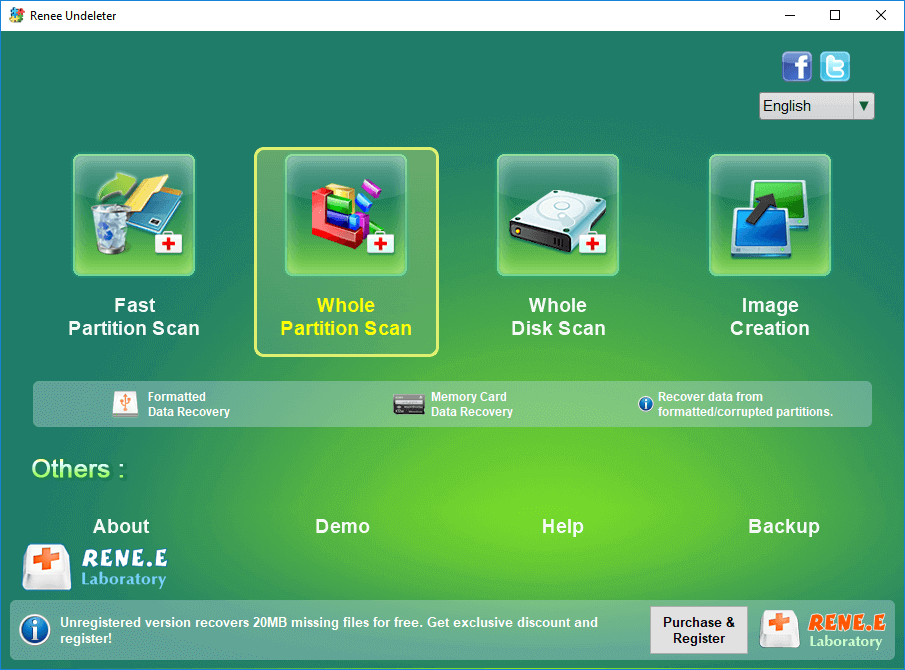 ② Select the target disk and then click on [Next]. The large disk will be scanned for a long time. 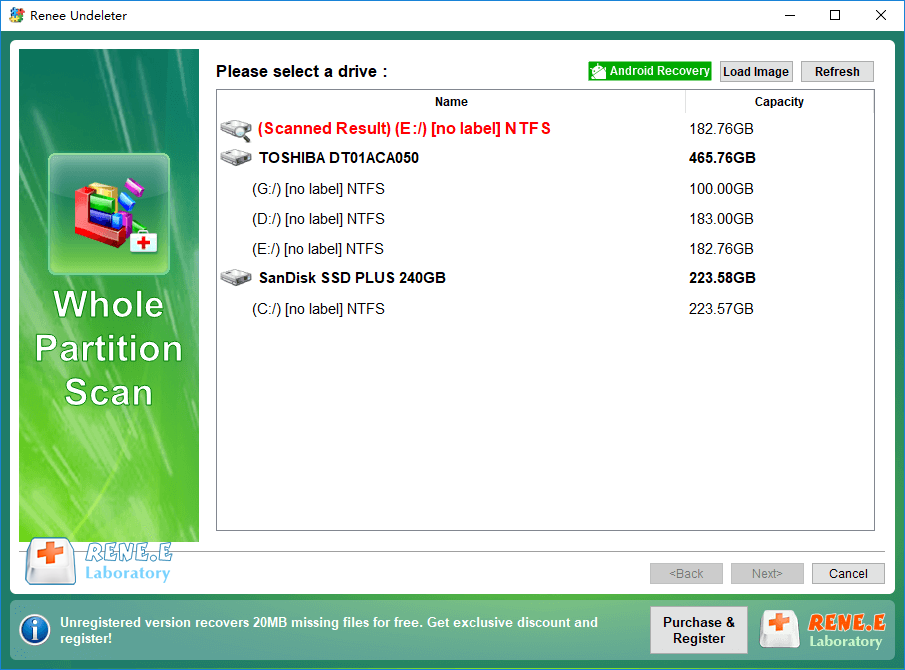 ③ Finally, select the files and click on [Recover] to save. 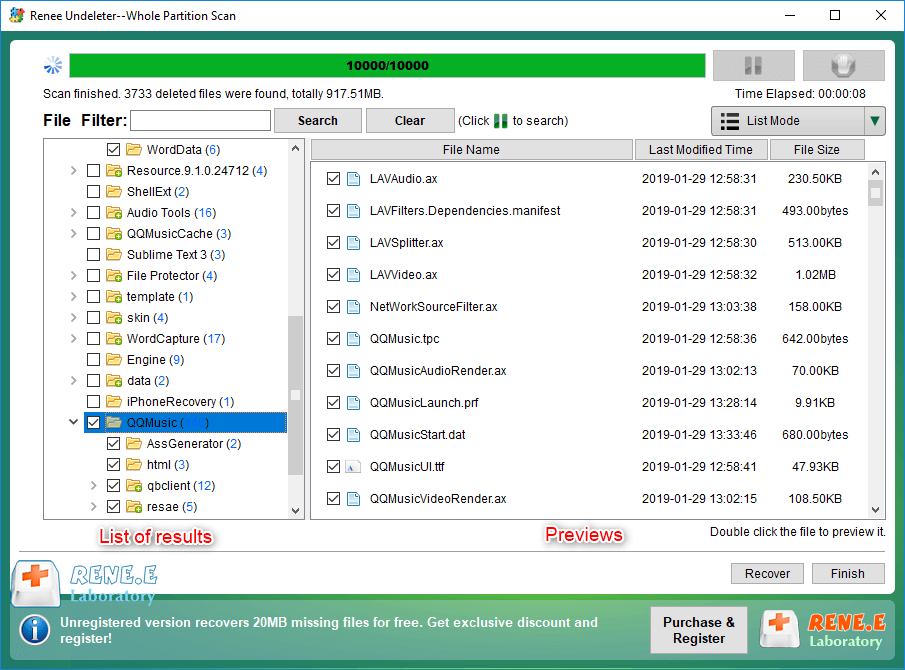 Fix Windows Error " The File or Directory is Corrupted and Unreadable"

John Weaver : Sometimes, Windows prompts the error “the file or directory is corrupted and unreadable” when you plugged a USB...

Unable to Get Access to SD Card? How to Format SD Card by Force?

Ashley S. Miller : When you are unable to get access to the SD card or you cannot write data into the...